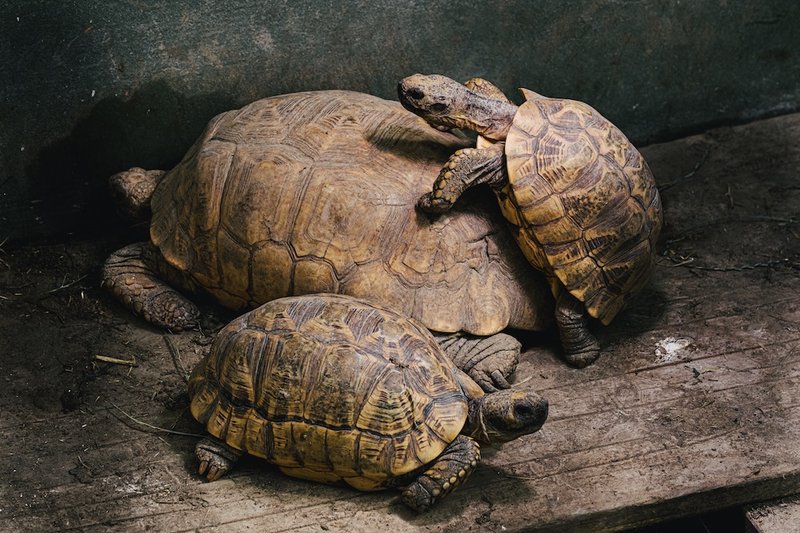 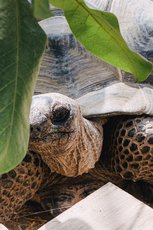 Some collect stamps, the Austrian trauma surgeon Peter Valentin collects turtles: He keeps over 600 of them in his garden in Klosterneuburg near Vienna. The species outlived the dinosaurs, the Neanderthals, and Jesus Christ. Their superpower is their inconspicuousness. The only thing left that could be the demise of the 220-million-year-old reptiles is humans. A conversation about a GREAT PASSION and a CRAZY HOBBY.

“At the end of the summer, they didn’t fit in the aquarium anymore.”
Peter Valentin's first turtle actually belonged to his brother - but as he showed no interest, he adopted it...

Lara Ritter: We’re standing here in the “garden” of your house. In these six greenhouses you breed and keep hundreds of turtles. Do your neighbors think you are crazy?

Peter Valentin: I suppose so! I probably inherited my interest in natural sciences and a passion for collecting from my father. He was an enthusiastic astronomer and collected stamps. In my case, these two predispositions seem to have merged into one obsession.

Stamps are a bit easier maintenance. Dogs need to go for a walk, the cat likes to be stroked. What do you do with your “pets”?

Watch and learn. Many people think turtles are boring and slow, but that’s not true! They are awfully fast when they are hungry, and clever. Although their hearing and vision are poor, they sense vibrations and even recognize me by my footsteps. When I approach, they remain calm, but if my son and other kids come storming into the greenhouse, they go into hiding. You, Mrs. Ritter, must radiate a positive turtle aura – the animals are staying put at their place quite indifferently.

What an honor! How do you notice if your turtles are in a good or bad mood?

As Walter Sachsse, a turtle researcher from Germany, once said: “A healthy turtle is invisible.” It only comes out to feed, mate, and lay eggs – otherwise, it lives in hiding, for it is virtually fighting for its life all the time. If you don’t see it, you know it is fine.

“A healthy turtle is invisible.” 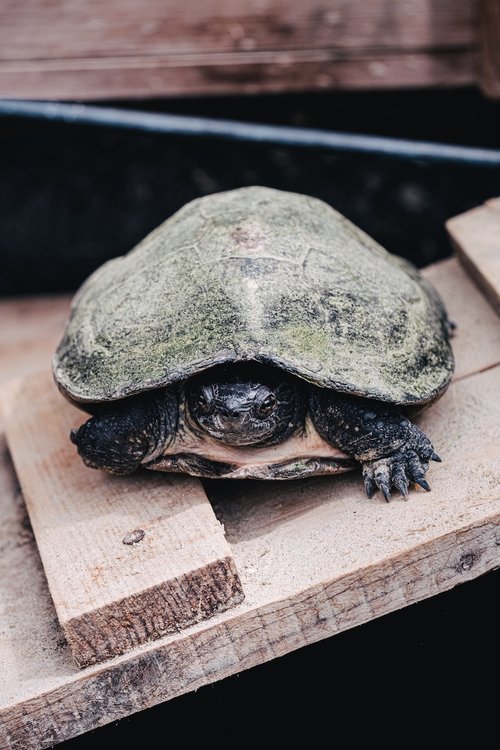 Peter Valentin simulates the climate of the turtles' countries of origin in his glass houses, which means: high humidity and high heating costs.

Tell us about your first turtle!

My first pet was a red-eared slider turtle, which is now forbidden in the European Union to prevent its propagation. Ours was lonely, so my family got another one. Because of their shells their names were the “Light One” and the “Dark One”. One day, a third one arrived, which we called Gottfried because it was the patron saint of that day. For a while, I named each new turtle after the saint of the day.

In time, more than 600 turtles “arrived”. Are you slowly running out of names?

Only a few prominent specimens have a name, for example my giant tortoise George, who everybody loves. He’s curious and loves to cuddle and be petted. He is roughly 30 years old now, so just in puberty. When I got him, he was a toddler. My friends warned me that he will get huge – well, that’s exactly what happened.

“George is roughly 30 years old now, so just in puberty.” 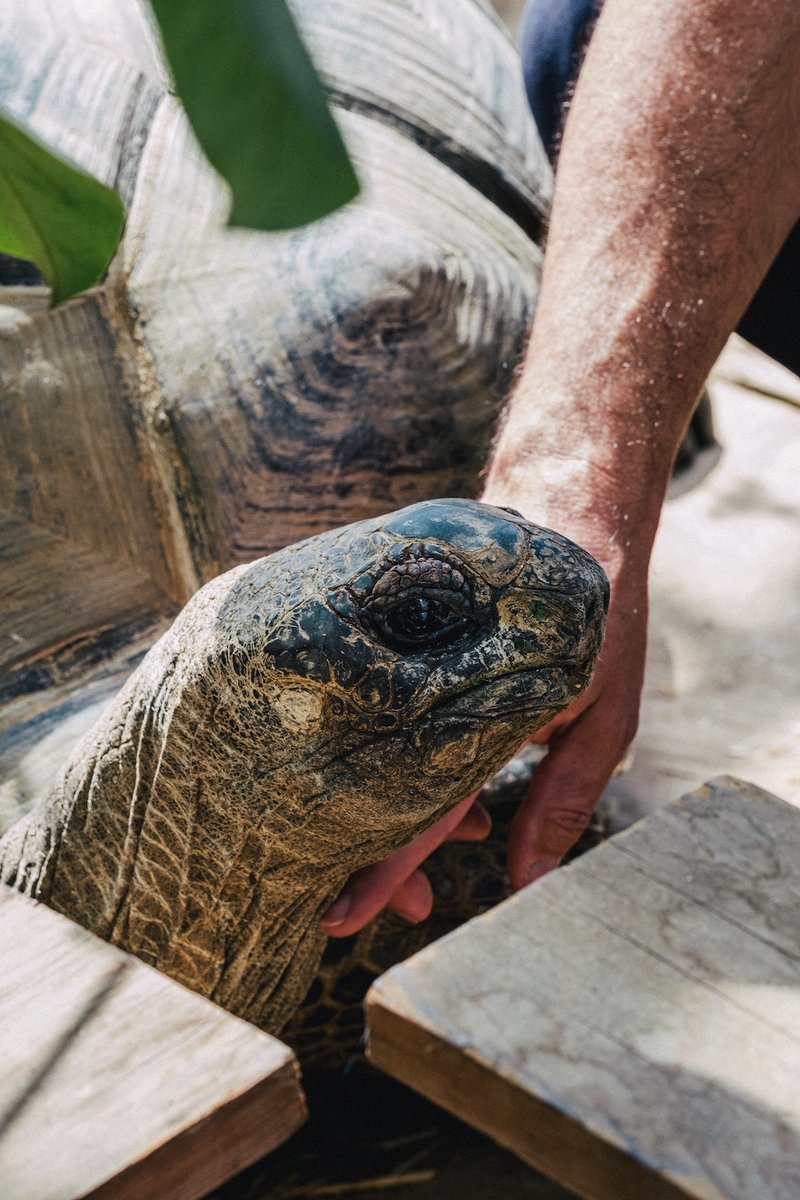 Do you cuddle your animals?

With my George, yes, because he is trusting. But otherwise, that’s just not done. It’s better to leave turtles alone – these are wild animals, which cannot be domesticated. They are loners, only meet each other to mate once or twice per year, and that’s it. The small Ryukyu leaf turtles keep a proper distance of around 50 meters from each other.

How did three turtles become 600?

We read in a book once that these animals need sun and warmth, so we went out and bought a kiddie pool. The turtles bathed in the sun the whole summer. In the end, they were so big that they didn’t fit back in the aquarium anymore. A year later, friends of the family brought their turtles to spend the summer holiday with us. The same thing happened as with our turtles…

… they became too big for the aquarium?

Exactly. We had an aquarium that was vacant at the moment, so we took them in with us. But then the number of our turtles grew to an epic, almost unmanageable count of over ten…

“I flooded the cellar for my aquatic turtles.”
George is a giant tortoise - other animals of his kind have existed since the 19th century. The famous giant tortoise John, which now lives on the Atlantic island of St Helena, was born in the Seychelles in 1832.

It stayed at ten specimens for a long time. But at the end of the 90s, I made some travels to Southeastern Asia and imported turtles, which were already then rare, via an animal tradesman in Hong Kong. In the meanwhile, many of these species are extinct in the wild and only live in captivity with crazy people like me. Today, most of my turtles are own offspring.

So one aquarium was soon not enough anymore?

As soon as my room was full, I occupied my parent’s attic and garden. When I had to move to Gmunden in the Salzkammergut region for professional reasons, I rented an apartment and flooded the cellar to accommodate my aquatic turtles. Another room I set up for my tortoises.

“II flooded the cellar to accommodate my aquatic turtles.” 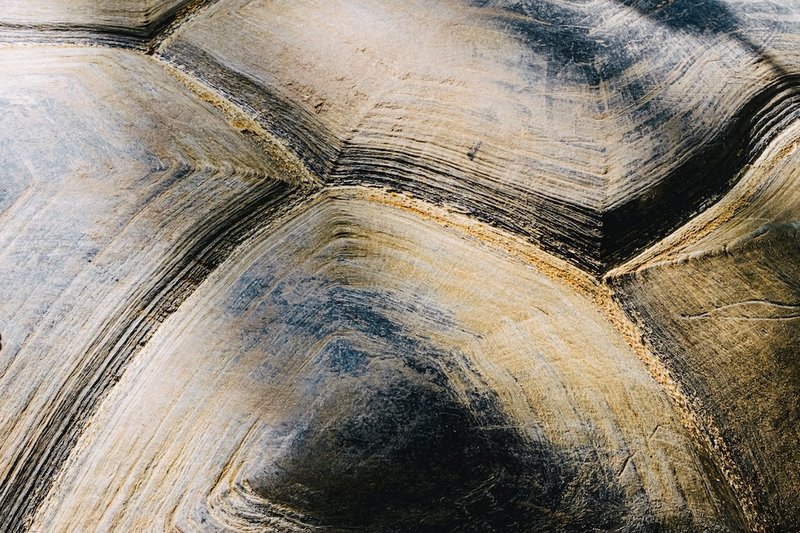 It was borderline, but fun. Then, about 20 years ago, me and five other “lunatics” rented a greenhouse in Vienna’s 22nd district, where we housed our turtles, built ponds, and took care of the animals together. It was a nice place to meet and hang out, but at some point our lives went in different directions.

You are an independent knee specialist with your own doctor’s office. How does this “normal life” go together with your exceptional passion for turtles?

A friend, the head of a marine biology institute in Bangkok, once asked me to operate a sea turtle she took care of. The turtle was unable to move one leg, so my friend said: “You’re an emergency surgeon, do it.” At first, I declined vehemently, as I am not a veterinarian. But finally, she convinced me and anaesthetized the turtle. I reset its shoulder, then some months of physiotherapy followed. It recovered well in the end, and my friends sent me a video showing how they released it into the ocean again.

When it comes to myths, there are a lot of them around turtles – will this seal their fate?

A big problem is that they are considered a remedy in traditional Chinese medicine. This turned out to be fatal for the Chinese three-striped box turtle, as it is said to cure cancer when eaten as a soup. Numerous scientific papers have already proven this wrong, but the myth still circulates. That’s why they are being bred by the thousands in Chinese farms and generating utopian revenue. It’s a part of every company dinner, every wedding and family celebration. If an uncle has cancer, he gets two turtles in his soup.

“If an uncle has cancer, he gets two turtles in his soup.”
Many turtle species have become extinct in the wild and only live in captivity.

What needs to happen to prevent the extinction of turtles?

We need to preserve the jungle and not plaster everything with concrete or cultivate it as agricultural land. And we all know what all ends up in the oceans.

Experts see trade with turtles as part of the problem. Do you feel somewhat complicit?

Definitely not. The real problem is forest clearance in Southeast Asia, illegal poaching, and selling turtles on Chinese wild animal markets. Moreover, trade with turtles is now strongly regulated, and the animals still being imported are rarely from the wild, rather bred specimens. These accusations also neglect the fact that private turtle keepers now publish more scientific works about husbandry, biology, and breeding the animals than zoos and museums.

Does dealing with these magical animals give you strength?

For sure. I often have to do with patients who are desperate. It helps when I don’t just talk wisely, but also transmit a stream of energy to them. And this energy I draw from hundreds-of-million-year-old turtles.

“Now we are square.”
When George the turtle is to be fed, he is dismissive and offended. "He escaped yesterday, so I scolded him," says Valentin. But after a few strokes, he accepts the courgettes.

Do turtles have special abilities that you would also like to possess?

I should probably learn serenity, composure, and hibernation from them. To rest from the beginning of November to mid-March – I’d love that!

Are your animals annoying sometimes, too?

There are often surprises, be it breakouts, havoc in the pen, or when one turtle crawls over to another and they fight. This can end in severe injuries.

Turtles have a good memory – are they resentful?

One of my Asian female turtles had an upper jaw that grew too long, so I had to cut off a part of the keratin plate. She did not like that at all and got really grumpy. The next day I was standing in the pen feeding the turtles, and all of a sudden I felt a piercing pain in my Achilles tendon. This turtle had just bitten me in my leg, imagine! It seemed like she laughed and grinned at me, like: “Now we are square.” That was her revenge, since then she never did it again.

Turtles can get 200 years old – what happens when they survive you?

I guess my heirs will have to break their heads about this. (laughs) The turtles will hopefully continue to have fun and a good home. The ideal case for a turtle breeder like me is naturally when the kids are just as nuts as their parents.

Thank you for the conversation!

Dr. Peter Valentin is a specialist for trauma surgery and lives with his wife, his son, two dogs, and more than 600 turtles in Klosterneuburg near Vienna.