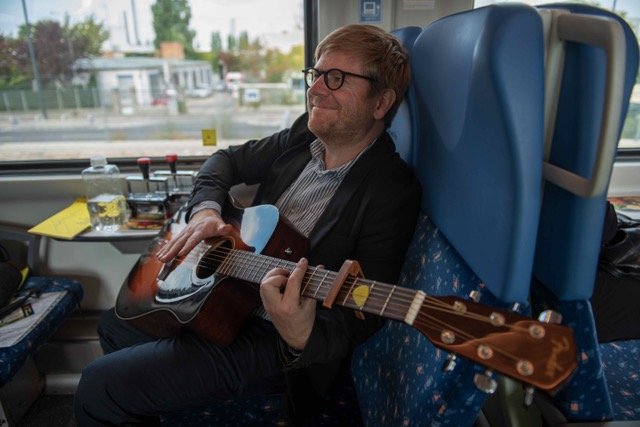 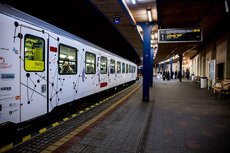 by Paula Pankarter, in People

TRAM is about connection, connection through art. The aim is to connect the two capitals of Europe, which are the closest together in spatial terms and yet so far apart: Vienna and Bratislava. Juraj  Čarný has become the passionate couple therapist of these two metropolises of the East. We talked to the curator of the Art Train, about the ambivalent relationship between these two capitals.

TRAM is an art train that functions as a cultural centre and gallery. The ÖBB/ZSSK train runs every day between Vienna Central Station and Bratislava Central Station. The project was initiated by the Austrian ambassador in Bratislava Helfried Carl and was inspired by the historic railway of 1914, when people were travelling from Bratislava to Vienna for a cup of coffee. The project aims to bring the two cities closer together again.

“In 1914, people drove from Bratislava to Vienna for a cup of coffee.”

Why art in a train?

Public space is much more interesting for presenting contemporary art than classical galleries and museums. I also dream of exhibitions at airports or boats. The train is a place where you can really concentrate on your audience. In museums, the audience runs from room to room. I think contemporary art needs more attention and there’s that attention on the train, because many people get bored during the journey anyway. That’s why you can create a different form of communication with the audience on the train than in a classic museum. For me, this is the most exciting aspect of the train project.

Right: Workshop with students of Academy of Fine Arts and Design in Bratislava led by Jozsef Rokko Juhász and Nanxi Liu.

What is the most exciting thing you have experienced with the TRAM project?

There were so many interesting moments. But I was particularly surprised by the reaction of the audience. The train is used by so many commuters who just stare at their mobile phones or laptops while they are on the train. When you enter a gallery, you enter a completely different kind of space. In the train, people are trapped in this form of space; they can’t just leave the train when they want to, like in an ordinary gallery. The train journey takes an hour and when a performance or concert takes place on the train, the audience has to sit back and watch it. (laughs)

Top right: The works of performance artist Doris Steinbichler range between performance art, visual art, noise, electronic music and free improvisation. She uses analog visuals and voice improvisations to make simultaneous, overlapping and contradictory perceptions visible and audible. She responds to mental disturbances in the urban environment of the 21st century with experimental psychology and shamanism.
“If ‘Hyperloop’ is realized, you can drive from Vienna to Bratislava within eight minutes.”

In 1914 Slovakia belonged to Hungary. We were one country. That is why we were much more closely connected than we are today. I hope that we will be able to continue this feeling and revive the old unity. In 1914 the train connection was to bring Vienna and Bratislava closer together. At that time the journey took two and a half hours, which was super fast for the time. If Hyperloop is really realized, you can drive from Vienna to Bratislava within eight minutes. Something we can’t even imagine today. That would certainly change the relationship between the two cities enormously once again.

“I always thought Vienna wasn’t interested in Bratislava, but actually Bratislava isn’t interested in Vienna.”
In her dance performance the Slovak dancer and choreographer Petra Fornayová whirls through the TRAM in shimmering dress and lets the train passengers look up from their mobile phones.

Vienna and Bratislava are only 60 km apart, but culturally they are so far apart. What explains this distance? What separates the two cities from each other?

There are historical reasons and it has a lot to do with the fact that the big institutions do not cooperate with each other. There is a lack of motivation.

When I visit openings in Vienna, I never meet anyone from Bratislava. There is a great art scene in Vienna, but Bratislava doesn’t profit enough from it, although it would be so obvious. Actually, I don’t know why we don’t pay more attention to each other.

“The West has learned nothing from the East.”
The performance artist Paola Paz Yee searches for the non-linear dimension of time and tries to inscribe her body into a poetic collective space through the dialogue of meditative exercises.

What can Bratislava learn from Vienna?

I think we can learn from each other a lot. After revolution in 1989 East has appropriated capitalism, culture, products and systems of the West, but did not come with own influential ideas, own philosophy and values that should be useful for the West. The East was believed to give something to the West, but in fact the West learned nothing from the East. That’s a problem we're not aware of. Cultural exchange must take place in both directions.

“Everyone has a responsibility to contribute to a better life.”
Right: performance called “When... ” by Ilona Németh

Stefan Zweig wrote that only cultural exchange and cooperation can save Europe from a terrible world war. Do you believe art can prevent war?

When I see that we are living in an age of hybrid wars led by artificial intelligences, as a curator and cultural manager I cannot stay in my gallery and only organize exhibitions of beautiful pictures. Everyone has the responsibility to contribute to a better life. All the events of recent years have driven me to take action. I don't want to become a political activist, but I can cooperate with artists. And art can help to understand how we live. I think there are many ways to save the world from war. Art is certainly only one of many.

“I believe that Slovakia can become an island where European Nazi tendencies can be stopped.”

Last year the Slovak investigative journalist Ján Kuciak and his fiancé were murdered. Is the art and culture scene in Slovakia free?

We live in peace. No one expected anyone in Slovakia to be murdered for political reasons and we were all shocked. The murder of the young Kuciak and his fiancé initiated a change that is also reflected in the election. We have a generation of young politicians who are really trying to change the political language. People understand that we have to do something and cannot just remain passive. They are beginning to think more and realise that they have to fight populism. I believe that Slovakia can become an island in Central Europe where Nazi tendencies, which are a problem in all Central European countries, can be stopped.

“That’s what inspires me about Vienna: The possibility that structures can really be changed in the long run.”

What makes Vienna so special to you?

Vienna is more than the title most livable city in the world. Every time I visit Vienna, I learn something. I dream of a smart city like Vienna. A good example is Mariahilfer Straße. The concept that the cars take care of the pedestrians works great. But such projects have to be planned for a long time and in Slovakia this is not possible because the governments are so populist and only so short in power. That inspires me to Vienna: The possibility that structures can really be changed in the long run. That is something Bratislava can learn from Vienna.

“Bratislava has always been a city that robs me of energy and gives me no energy.”

Does Bratislava change less than Vienna?

In Bratislava, systems change only very slowly and changes were based not on good concepts, but on individuals. Therefore these changes do not have the positive energy as in Vienna. I think Vienna has a very good energy at all. Bratislava has always been a city that robs me of energy and gives me no energy. However situation changed last month when architect Matúš Vallo won a mayor elections. His strategy to change Bratislava (called Plan B) is based on a strong concept made in cooperation with more than 70 experts and I believe this will open a new level in cooperation between Vienna and Bratislava as well.

“How to connect Vienna with Austria and Bratislava with Slovakia?”

What future do you prophesy for the relationship between Vienna and Bratislava? What is your utopia?

One of my utopias has already been realized: The Twin City project. The Twin City Liner is a ship that crosses the Donau between Vienna and Bratislava. The concept was to really connect the two capitals, which are actually so close to each other. My utopia would be a much closer relationship between the two cities. But Vienna is a different world than the rest of Austria and the same applies to Bratislava. For me, therefore, the question is not only how to connect Vienna and Bratislava, but especially how to connect Vienna with Austria and Bratislava with Slovakia. If capitals are not connected with their country, this causes problems. The population of the capitals votes completely differently than the rest of the country. This leads to great divisions and struggles within a country.

And what is your dystopia?

The most terrible scenario would be if we really closed the borders and stopped cooperating at all. That is why cultural cooperation is so important. It brings people closer together. Then what populists do doesn’t count. Even if the border were closed, we could still remain friends and cooperate with each other.

“My dream is Vienna to become the leader of all Eastern European countries.”
Dinner on the locomotive? What will be served under the chandelier and who should gather around the tablecloth? Or will the laid table remain untouched, like a relic from a bygone era? (Installation: Otis Laubert Incoming feast, exhibition DepArt, Eisenbahnmuseum Schwechat)

Do you dream of 1914, when Vienna and Bratislava were one city?

You first have to wonder what it means to be one city: Do you mean technically one city, or one city in our heads? If Vienna and Bratislava are actually connected by this 8-minute high-speed train, that will certainly change a lot. But there is still no larger institution in Vienna that focuses on Central Eastern Europe. This is something that Vienna will definitely have to face in the future. Because until now Vienna has clearly been a purely Central European city. But culturally Vienna is also a capital of the East. But no institution makes use of this potential. My dream is Vienna to become the leader of all Eastern European countries.

Juraj Carny is an internationally renowned curator who is particularly interested in networking art scenes from different countries. He is founding director of the Kunsthalle Bratislava, president of AICA Slovakia, founded the first biennial for contemporary art in Bratislava, the Otis-Laubert-Museum as well as the private non-profit gallery SPACE, which is committed to international exchange and initiated the following international networking projects: BillboArt Gallery Europe, Crazycurators Biennial, SPACE Residency Lab and the travelling gallery nomadSPACE. Carny also teaches project management and marketing for artists at the Academy of Fine Arts and Design in Bratislava.

TRAM runs until 16.01.2019. All further information about the TRAM project here!