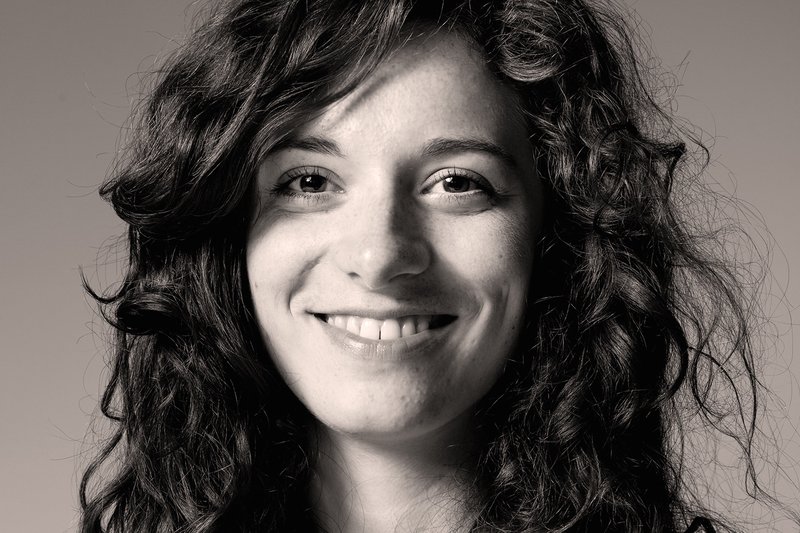 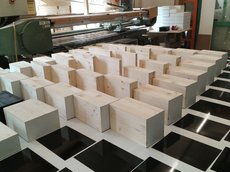 by Stephanie Rugel, in People

The young Viennese designer Marlene Wolfmair (*1988) came directly to our meeting point in the HALLE restaurant at Museumsquartier from the joinery 2M in the 10th district: “That’s why I’m still a bit dusty.” Let’s start at the beginning!

Stephanie Rugel: You just came from the workshop of the Viennese joinery 2M in the 10th district. Your are working with the family business (founded 1930) on a project for the “Passionswege” program in the framework of Vienna Design Week, where local traditional companies join forces with Viennese designers. Where wood is chopped splinters must fall, but obviously sand also leaves behind its traces. They likely don’t have people like you in house all that often?

Marlene Wolfmair: We were “patched together” by Lilli Hollein, the director of Vienna Design Week. We met in Milan, in the Salone del Mobile. I was there for my Fabrica scholarship, a research program of the Benetton Group. We chatted, and then sometime thereafter I received an email from Vienna asking if I was interested in working together on a project. There wasn’t a theme at that point, but it was clear that artists and designers were brought together with handcraft businesses – and there are a lot of really great ones in Vienna – to work on an innovative project.

Have you learned something from the handcraft experts?

Sure. I am very happy to cooperate with the joinery 2M because they have the expertise. They’re real professionals who know what they are doing. We understand each other extremely well, and it’s great fun. But it’s challenging – it is handcraft in the truest sense of the word. When you do it all day long, you feel it physically.

"I also make commercial projects – hey, I need to fill up my refrigerator, too"
Marlene Wolfmair in the workshop of 2M in the 10th district of Vienna.

You learn a lot about materials and surfaces, which fits surprisingly well with the digital works I make. You should also know that the Viennese family enterprise 2M of Walter and Michael Müllner, which actually plans and builds high-end furnishings, also runs a special workshop for sandblasting techniques where they process a wide range of materials such as glass, plastic, metal, ceramics, or wood. The grandfather of the two originally applied the technique to glass for period furniture.

You use the knowledge for your digital work?

When I make a 3D model of an object on the computer – for example, this salt shaker here on the table – it is not perfect. It has a scratch or a crack somewhere, and that’s why it seems real. And when I make something like this in 3D I make sure to also build in imperfections or mistakes so that it seems more real. I spend a lot of time investigating renderings, images that look like photos. It is very difficult to attain this, but there are a few tricks to make it look real. You need to really understand surfaces and materials, and that’s the opportunity I have at the moment.

The project for Vienna Design Week is called “Logs”. It is an arrangement of wooden blocks that flows from a wall decoration into a shelf.

And “log” is also the abbreviation for “logarithm”, which determines the depth and height of the blocks. For this project we chose to sandblast the wood – in this case, indigenous spruce. The machine has a sort of water hose that sprays the sand at a very high pressure. You definitely need to wear protective clothing. Whenever you blast a surface, material is removed. With wood there are “strong annual rings” and “soft annual rings” – I’m not totally sure if that’s the correct technical jargon. (laughs) Only the strong annual rings remain in this procedure, and the character of wood comes out stronger.

"It’s like with people and wrinkles – you can see the grooves."
For this project the wood is sandblasted.

What are you doing here – is it art, product design, mathematics, or everything together?

I call myself a “3D Generalist & Designer with specialization in lighting, shading & rendering”. It’s hard to say where the border is between art and design, but I do make a distinction between art and design. I also make commercial projects – hey, I need to fill up my refrigerator, too. Design has an economic dimension; it is rarely non-profit and generally aims to sell something. In contrast, for me art is not something with profit as a primary objective.

"The aim of design is to make life easier."

Design is an applied form of art, functional?

Yes, applied. I would say that design answers questions and provides solutions. Art asks questions, perhaps also uncomfortable ones, that’s why art is more free than design. It is difficult to properly categorize my work. The project for Vienna Design Week 2015 is under the “design” umbrella. The intention is not necessarily to produce something for sale but to experiment. But c’mon! You can buy it! (laughs)

Analog or digital – what would you choose?

Oh, that’s difficult. It probably depends if you are allowed to create something yourself or just implement it. Naturally, a lot more can go wrong with handcraft – there’s no undo button. That has also become clear to me in the cooperation with 2M. When I drill a hole wrong, it’s over. Both are very fulfilling, in different ways. I’m happy to be doing something with handcraft at the moment because I sit behind the computer way too often.

How did you come to do what you are doing at the moment? Was there a trigger?

Not consciously. But just yesterday an intern applied at the joinery, and I overheard a bit of the interview. Mr. Müllner said to the applicant: “I think it is great that you build with Lego.” And then I thought, Lego was also really important to me as a child.

"When you build with Lego blocks you probably understand three-dimensionality better later in life."

What are challenges for your?

What comes to mind are these admission tests, for example at the FH Joanneum in Graz or at the HBLA for Artistic Design in Linz. An immediate challenge for us was the so-called “hose test”, which checked one’s three-dimensional understanding. The aim is to find out whether the depicted hose is seen from above, below, or from one of the sides. I found it easy! Things like that challenge me but I really love it.

Anything about your job that bothers you?

What preoccupies me at the moment is that I have to make a decision about purchasing software. I can’t buy everything I would like to have because it is far too expensive. Often I was lucky and the equipment was available where I was working, but now I am self-employed and have to make decisions, and it naturally involves money. I’d like to have more budget, more software, more tools, and thus more possibilities as well.

I look forward to drinking a toast to the “Logs” project with the sympathetic 3D Generalist. As an appropriate end to our interview an Augustin street paper seller comes to us and Marlene buys a copy. He advises us to stop talking about work and get out and have a wonderful weekend. Word!

Marlene Wolfmair:
Following her studies at the HBLA for Artistic Design in Linz, the 3D Generalist with specialization in lighting, shading, and rendering Marlene Wolfmair (*1988 in Rohrbach, Upper Austria) studied information design at the FH Joanneum University of Applied Sciences in Graz. She has worked in post-production with Golden Girls Filmproduction and as a freelance designer in Vienna. In 2014 she was awarded the Fabrica scholarship from the research center of the Benetton Group in Treviso, where she worked on projects for Airbnb, Daikin, Benetton, and the Expo Milano. Her works have been exhibited in Salone del Mobile in Milan, the Biennale Internationale Design Saint-Etienne in France, and in the Museum of Future Government Services in Dubai.

Sandblasting at 2M: Traditional handcraft is combined with high-tech in the 2M special workshop for sandblasting techniques. The technique the grandfather had primarily applied to create sandblasted glass for period furniture since the company’s begin in 1930 was incorporated into the joinery in 1992, making it a sought-after provider of sandblasting for glass, plastic, metal, ceramics, or wood. The spectrum of refined surface modifications also includes elaborate finishes and nano-coatings for glass.