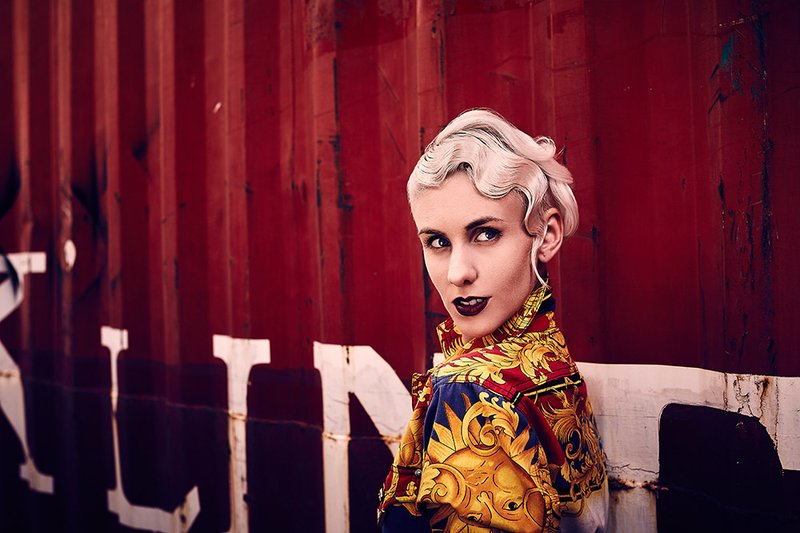 by Shilla Strelka, in People

An elaborate megalomania and an indecent shot of narcissism – Lisa Eckhart seems alight from the bonfire of the vanities. In her rogue programs the young Austrian poetry slammer reveals the weak spots of society, picks at its raw nerves to stir up things. Political correctness is thrown overboard, taboos are broken with a ice-cold-blooded nonchalance, yet the rhetoric is always outrageous and concise. Where does the character Eckhart start, where does it end? Who is she in private? A conversation short before an act, behind the scenes – or already on stage?

“There always has to be more mega than mania.”

Yes, this fetish simply developed, long before I had the necessary means to maintain it. In the meanwhile I think all my fees go to fake teeth and Versace.

You come across as a very direct person. I’d probably get an answer to any question I ask, no matter how personal it would be. If it is the truth, that’s anyone’s guess. Do you ever ponder what is too private for you, what you disclose and what not?

I got better at it. I have never been wary, but rueful afterwards and quite worried if I should have said certain things or not. Then I decided there’s no reason to squirrel away secrets. Where would this place be in my life where all these secrets are kept? What place am I saving them for? As there isn’t such a place I might just as well open it up completely. I don’t ask if something is too intimate, rather if it has some entertainment value.

At the same time you are skeptical toward social media. With your degree of narcissism, I didn’t really expect that. That is already too private for you?

I just can’t bring myself to it. If someone approaches me for an interview, there must be certain readers behind it, and I will sincerely answer everything. But it is very hard for me to just post something myself. I don’t see the relevance. I do need certainty, like people who buy a ticket to see me on stage. Then I can assume that they are interested. I know, if people are following me online I can also assume this, but still it doesn’t get in my head. I feel it’s almost like virtual trespassing when I post something on a timeline. Why should I do that? What is my right there?

“I feel it’s almost like virtual trespassing when I post something on a timeline.”
"I'm not an artist, I'm art."

But you would probably generate a lot of likes if you did. Also with selfies on Instagram …

Yes, but what counts for me is the definition of success. Making selfies is something else than having paparazzi following you. If people want to see pictures of someone, then this person will notice it by the fact that people are taking photos of them. No, as much as I worship vanity, that’s too much for me, and it also destroys the myths that everyone should preserve. I simply don’t have the heart for it. I cannot follow it. It’s too hip for me and not my world.

Your appearance shows that identity, dramatization, and construction go hand-in-hand. What are you doing wrong which makes everyone presume there’s some other “real” person behind the persona? Someone like Andy Warhol probably didn’t need to justify himself and prove authenticity so often.

I’m surprised. I never consciously staged or performed anything. I don’t act as a character. I wonder why people want to deprive themselves from my illusion. Why do they see more value in discovering something behind? I can’t take this personally because I see them doing it to everyone else, too. On the other hand, I find it very interesting that people have no clue whatsoever when I actually flat-out lie to their face.

In your gesture and habitus you also reflect on language as a medium of power and you love to play with the hierarchical relationship that the stage offers.

Yes, absolutely! That’s probably one of my main motivations for doing it! Of course, the power is in my hands when I have the word. While I’m just a language pimp on stage, which it can also escape from, in this moment it is my accomplice against those out there. That’s naturally a question of power which is incredibly exciting.

“There is no other humor than black humor.”
The audience loves the sharp cynicism in her language, and she thinks it has grown through positive and negative experiences.

Why is this situation equally as exciting for the audience? Doesn’t it make a difference when there is a young, attractive woman up on stage?

Sure, all this plays together. The audience wants to submit. It’s this masochistic pleasure, which has a sexual charge. When you give them a sexy appearance on top, then they willingly throw themselves in the dust. Or they loath it so much that they feel hate.

Perfection and self-reflection seem to be part of your attitude. Isn’t that extremely exhausting?

I don’t feel any pressure as I don’t see myself a perfectionist at all. I am an incredibly impatient person. Especially when it has to do with texts. When something doesn’t flow I find it inferior. I am not someone who fine-tunes and seeks perfection in the subtle handcraft. To a certain degree, many things arise from the moment. Also the movements on stage are nothing that I control. There is a lot of unconscious skill involved.

You alienate quite a lot of people…

For me, form is generally more important than content. For a long time I wasn’t aware that I alienate people so much. And I’m still irritated by the many ascriptions typical for cabaret, which they vomit out without thinking. For example, when they talk about vicious or black humor. All humor is black. It exists to spare us from pain or affects. There is no other humor than black humor. That’s why I would never say any of it was vicious, cynical, or sarcastic. By the way, I think sarcasm is a high-caliber art form.

“It would screw me up if I had too many talks with other people.”

Would it make a difference if your content came from a white 50-plus man?

I don’t know. In Germany they say I’m well received because I am an Austrian; at home I hear that it is far easier as a woman. But ideally, a text is inseparable from its author. I also don’t believe that you can somehow incarnate someone else’s texts. If you do, then there is something really wrong with them.

You mean in cabaret?

Yes. If I can put my text into anyone’s mouth, the text has no character. I know that only I can do my texts. That’s not really a special competence, I just couldn’t write for anybody else. I cannot feel into the art of others. It would be a completely moronic thing to do.

“I don’t ask if something is too intimate, rather if it has some entertainment value.”

Are you often met with hostility?

Doesn’t this have to do with the cabaret context? This inclination to eccentricity would be tolerated as an actress.

The advantage of cabaret is that the word is central. There’s also no age limit for women. Indeed, it comes across incredibly intellectual, and today’s intellectuality frowns upon aesthetics. Acting doesn’t have that because it is primarily a visual art form. You can see it with the men in the cabaret scene. They strive for fraternization with the audience, which doesn’t allow for much flamboyancy. The audience would hold it against them. But I believe it can be liberating to see a dramatization, something that consciously aims to be artificial in their eyes, because they already have enough authenticity.

Do you provoke recognition on the street or do you like it private?

I step out my house door, into the taxi, drive to the stage, and then back home again. There aren’t more chances to recognize me outside. I prefer to be in enclosed spaces. But when it happens, it is nice, of course, that can be quite cordial. It is simply a confirmation of my existence. Longing for it is so banal. When you don’t feel yourself enough, you need this affirmation from the outside world.

I wonder where your vocabulary and mannerist way of speaking came from. What outside world did you come into contact with, which had this effect on you?

I think it’s the lack of contact with the outside world. It would screw me up if I had too many talks with other people because I wouldn’t have the strength to speak anymore – or my rhetoric would turn into babbling.

“Every good sentence that I didn’t write myself makes me sick.”
Lisa Eckhart reads her texts to her mother in advance by telephone before she goes public with them. Mamma Mia!

Yes, I read what was necessary so I would never have to come back to it. I cannot read while writing. It can’t mix it up because I react very badly to foreign works. Either I am afraid that it’ll corrupt me because it’s bad, or I am so envious that it blocks me. Every good sentence that I didn’t write myself makes me sick. In fact, I can’t read writers whom I adore a lot. I can admire them in silence but must not touch them.

This competitive relationship must be exhausting.

Yeah, it’s not exactly the most relaxed world. Maybe I’ll get over it some day.

“The audience wants to submit. It’s this masochistic pleasure.”

Are you writing at the moment?

Yes, but I have discovered that being on tour inhibits me a bit. I have to retreat completely. I hear from colleagues that they pour out entire effusions in the train – that just doesn’t work for me. The outside world coats you with such an uncreative slime. And I am an incredibly slow person with a need for sleep like a new born. That means when there is the slightest physical effort on top, like walking to the train, I will anyway sleep for 16 hours. I wouldn’t know where or when I should be able to write something then.

Many people find you unsympathetic because you act so relentlessly out narcissism, megalomania, and vanity. When did this collision course start for you?

I think in the moment I was able to deliver it. Megalomania is so clumsy when you don’t offer something appropriate in exchange. When a very small person makes herself big, it is just a farce. There always has to be more mega than mania. In my teenage years Falco just needed to walk on stage and open his arms, and I was a believer. There was no compromise for him. That really fascinated me and I thought, that’s what you have to do. Not just on stage but as a life principle.

The extravagant language artist left her home in Styria for the wide world and can already look back on an impressive biography at the age of just 25. After studies in German at the Sorbonne in Paris, feminist field research as a sales-stimulating hostess at automobile fairs, teaching activities in London, and first steps in acting in Berlin she found her artistic home and professional destiny in the Berlin poetry slam scene. In 2015 she won the Austrian Poetry Slam Championships and her career gained momentum. The Austrian Cabaret Award followed in 2016, earning her international recognition – owed not least to her strong media presence. In addition to numerous other awards she received the 2018 Deutscher Kleinkunstpreis – Prize of the City of Mainz.