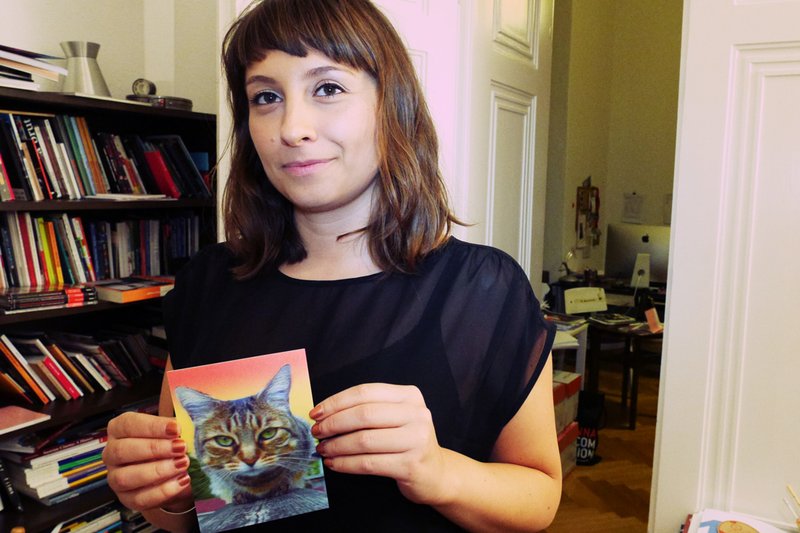 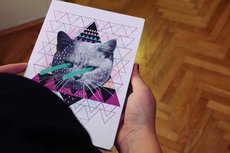 by Matthias K. Heschl, in People

Marija Milovanovic is not only the curator of the first Cat Video Festival Vienna, she is also an expert in feline hip-hop. We drank a glass of milk together with her.

Matthias Heschl: Can I pour you a glass of milk?

Can I also serve something for your cat?

Oh. But how did you come up with the idea of organizing a cat film festival then?

Can one simply show YouTube or Vimeo videos on the cinema screen?

No, you can't. Actually, it is a bit tricky to show Internet videos at a festival without knowing who the right holders are. At the Internet Cat Video Festival in USA, where videos are submitted, there is a system that clears up these legal questions at the beginning. But we curate a big part of the program ourselves, so we have to research the intellectual property rights as well. For example, in 2014 there was the section “Musical Cats” – cats in music videos. I stalked down the right holder for each and every video.

"There is always a new cat shooting star."

Stalked? How did that work?

Digital detective work! It was unbelievably difficult. With music videos we often didn’t know who really held the rights: the filmmaker, the band, or the label. Besides that, our first request was typically ignored. We had to be pretty persistent. Then the reactions were always the same: “A cat video festival? You can’t be serious!” It was not unusual that it took months before everything was cleared up.

How did Viennese filmgoers respond to the idea in the beginning?

In 2013 the event was actually conceived as an experiment, as a type of field study since we didn’t know how the Viennese would respond to our “radical idea”. Based on Walker Art Center’s experience reports, we were rather optimistic and made the courageous decision for a venue with a lot of space. An incredible 1300 people came to the Jesuitenwiese meadow in Prater park. The beautiful field was the perfect location for a cozy evening with a picnic blanket and drinks. In 2014 we could even top the success: 1700 cat video fans came to the Arena.

Is there a prototypical Cat Video Festival visitor? All cat nerds?

No, no! There are all kinds of different people. (laughs) What I really find nice is that there are actually fans who dress up as cats to downright celebrate the event. That’s why I think it would be a good idea to develop the side program in the coming years. For example, a hip-hop CD was just made by two American rappers who work exclusively with cat sounds. Perhaps they will come to Vienna for the 2015 edition, if we can somehow raise the money.

So the festival audience doesn’t bring their cats with them?

No, and it’s fine that way! Their cats don’t get anything out of it.

The Internet is full of cat content – why do cats have such star qualities?

Can I use a quote?

It’s from the program folder of the Cat Video Festival:

"The iron will of a cat can move walls, defy gravity, and drive its surroundings into chaos."

As a cat owner I can only agree …

Today, with platforms like YouTube and Vimeo, you can put everything online; a film is shot quickly with a Smartphone and shared via social media. Pop culture has become a sort of mass culture. Unlike dogs, cats don’t come across “trained”: They impose their will; one moment they’re purring, the next they’re hissing at you. These little animals have a certain character trait that works well in front of the camera. And naturally, sometimes it is simply the cuteness factor.

Airs and graces? Is every cat born a star?

Airs and graces are definitely in the nature of a cat. Cats generally don’t “sit pretty” or “shake a paw”. The big cat film star Henri, le Chat Noir, who speaks French in the video “Henri 2, Paw de Deux” and utterly surrenders himself to the sorrows of the world, has so far been clicked almost 9.2 million times (as of December 22, 2014). Will Braden, the author of the video, had a super idea: to film Henri the cat in his surroundings and to tell his story via off-camera commentary. In no manner is Henri coerced to pose. By the way, Braden is now the artistic director of the Cat Video Festival in Minneapolis.

So it is not enough for you when a cat video is just amusing? Which standards do you call upon in the curation process?

I don’t see much charm in searching out the videos with the most clicks on YouTube. For me, originality and aesthetics are central. Cat videos are also a trend in other countries.

The Moscow Cat Video Festival is one of the real big ones with thousands of visitors. Alexei Dimitriev, Vienna Independent Shorts Festival Artist in Residence 2013, curated the “Russian CATastrophes” section at our first festival. In the meanwhile, there are also offshoots of the festival taking place in Athens and Northern Ireland. In Greece the revenues are used to take care of stray cats.

Are we at the beginning or the end of this global cat hype?

People are just beginning to tap into this trend. There is always a new cat shooting star. A real market has even developed around it. Grumpy Cat, with almost 17.3 million clicks on YouTube (as of December 22, 2014) earns 10,000 dollars per appearance. You can buy t-shirts, posters, calendars, games, and pillows.

Now let’s come to Vienna: How does your future Vienna look like?

Probably like Planet of the Apes: Cats seize control of the world and humankind perishes. Nah, just kidding. (laughs) I miss the sea in Vienna! Ideal would be a mixture between Vienna and Barcelona.

Vienna is anyway adopting so much of Berlin’s hipster developments already. Complete districts, like the 16th, are mutating into bobo zones. In my opinion, Vienna has a more exciting mix than Berlin: the charming inner city, the historical background, and then there’s all the new projects, which are popping up all over the city at the moment – a cool mix.

What have you always wanted to do?

When I have enough time and money, I’m going to set off on a major film festival trip and trot around the globe from film festival to film festival, from country to country. (smirks) There will of course be the one or the other cat video festival, I guess ...