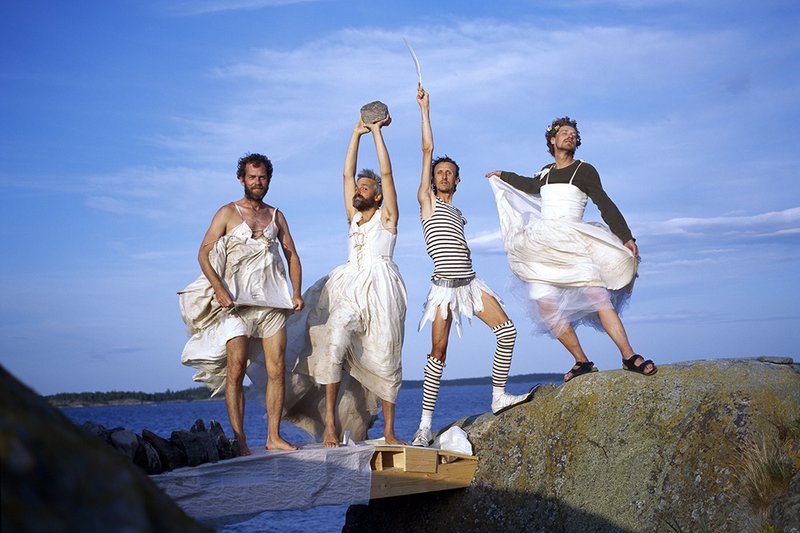 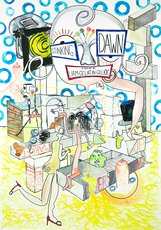 by Antje Mayer-Salvi, in People

“Are you trying to shock your audience? No, no, no!”

We like to keep things simple, just like the motifs of this wallpaper. Sewing a costume, for example, takes an incredible amount of work, so we’ll often just take our clothes off. Nudity is a great costume! Urine is a material that we carry around inside us, that we can use pretty easily.

Many people respond very sensitively to your work. What was that like with Arc de Triomphe, a sculpture of a naked man with an erect phallus pissing into his own mouth? It was set up in front of the Rupertinum in Salzburg in 2003, but was soon covered up in order to spare festival guests the sight of it.

And yet its just his own mouth he’s pissing into. He’s content because he can satisfy himself. The figure is happy, independent, and having a nice time with himself. That’s it! It wasn’t about showing someone peeing on himself, but about the beauty of independence.

Are you trying to shock the audience?

No, no, no! If it happens, it’s okay, but that isn’t our intention at all. There are no taboos or boundaries in art, so we can’t violate any. At best, we’re childish and always looking for a new challenge, like little boys. At Museum Boijmans Van Beuningen in Rotterdam we recently showed big shit sculptures. But it’s not “fecal art,” because we don’t work with shit. We don’t shit in museums either, we make totally classical sculptures!

Besides, the shit sculptures in Rotterdam were very neatly placed on rugs.

Exactly. Every detail is important and the rugs served as pedestals for the sculptures. We just think shit is a good and interesting subject, because it’s something that everyone is an expert in. In the same way that everyone should be a little familiar with at least one type of genitalia, the penis or the vagina. Maybe things would be easier for us as artists if we just hung things on the wall in a museum, but that’s too hard for us. Beautiful to us is when things are simple, take on a life of their own, develop, when they seem to just happen.

Thank you for the interview!

Internationally renown artist group Gelatin consists of four Viennese artists—Wolfgang Gantner, Ali Janka, Florian Reither, and Tobias Urban. The four met as children at summer camp in 1978 and have supposedly been working together ever since. Internationally, at any rate, they have been active since 1993.

Their humorous, spectacular, and poetic installations and performances are usually physical, intimate events. Involving their artist friends as well as the audience in their work, they address the exploring and overcoming of boundaries. They have exhibited internationally at museums such as Museum Boijmans van Beuningen, Rotterdam; Fondazione Prada, Milan; Musée d’Art Moderne de la Ville de Paris; Kunsthaus Bregenz; 21er Haus in Vienna; Manifesta 11 in Zurich, the 49th and 54th Venice Biennials, the Liverpool Biennial, or EXPO 2000.