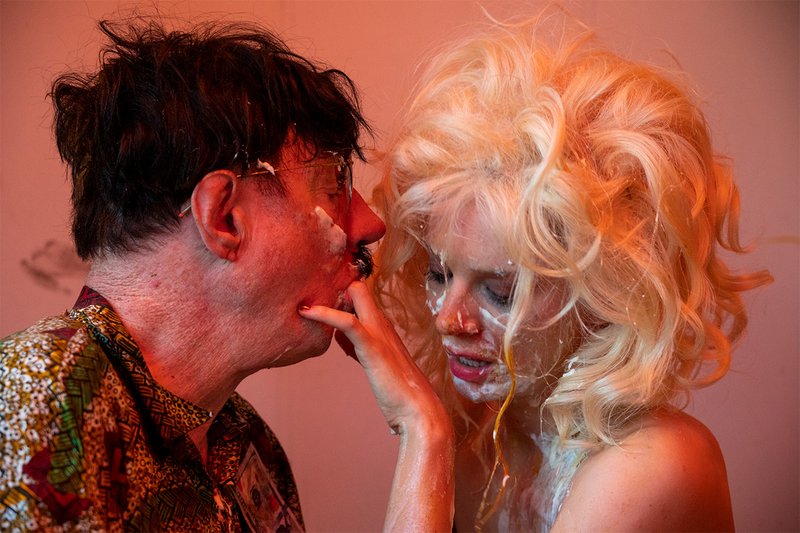 Sex and power, daughter and father, wife and husband, the eternal recurrence of repressed thoughts. In their film and theater performances NV / NIGHT VATER and A&E, renowned US artist Paul McCarthy and celebrated German actress Lilith Stangenberg reveal how all of this is just a universal part of our human psyche.

"These characters need to be used up, worn out, so that they don’t come back."
Paul McCarthy Performance stills from NV, Night Vater, 2019 © Paul McCarthy. Courtesy the artist and Hauser & Wirth. Photo: Ryan Chin

Antje Mayer-Salvi: Evil is always closer than you think. I’m at my parents’ house near Simbach, a small provincial town in Lower Bavaria where Eva Braun attended trade school at the local convent. Adolf Hitler, 23 years her senior, was born across the Inn river, in Braunau, Upper Austria. Do we all have an Eva Braun and an Adolf Hitler in us?

Paul McCarthy: We first shot NV/ Night Vater in 2019, an abstraction of Liliana Cavani’s 1974 film Night Porter, which is about a sadomasochistic relationship between a former SS officer, Max, and former concentration camp inmate, Lucia. In NV the characters change. I play Max, a vile, seedy American film producer, and Lilith plays the part of a German actress who comes to LA to audition for Max. After shooting we began working on A&E, which is an initialism of Adolf and Eva, and/or Adam and Eve. Both projects deal with the intersection and the entanglement of sex and power, male and female, father and daughter, mother and son, and Fascism.

Speaking of fathers, sometimes reality is worse than anything our imagination or artistic dramatizations can come up with. Josef Fritzl, for example, who held his daughter captive in his small-town Austrian cellar for 24 years, abused her and fathered seven children with her.

Lilith Stangenberg: I see A&E, Adolf and Eva, as archtetypes of men and women in a patriarchal world. They are also father and daughter, mother and son. It’s about our conditioning and the primal relationship between the sexes.  We all have a little Eva Braun and a little Adolf Hitler in ourselves. I really recommend that every German play Eva Braun from time to time. These characters need to be used up, worn out, so that they don’t come back. These two characters are toys to me. Paul’s Adolf is a clown, a buffon. When you’re dealing with such dark personas, humor is a good approach. Think of Charlie Chaplin’s The Great Dictator. It’s about power and how it circulates in a relationship. Eva can also become the tyrannical mother and Adolf the little boy.

In both performances, the characters oscillate between who is in control, and who has power over the other?

P.:  It’s not clear in A&E whether Eva is actually the daughter and Adolf is the father or if it’s just words in the sexual Oedipus game they’re playing with each other. At times Adolf is referred to as the son and Eva is the mother. These shifts are fluid. Adolf is referred to as an American Adolf, and Eva becomes a version of Marilyn Monroe. In Night Vater Max is an older producer, a predator who feeds on young aspiring actors. Actress Lucia wants to spiral into a psychological abyss.

In one scene you painted Paul red, Lilith?

L.: He stood on a chair and acted like a dictator. Then we gave him a little Hitler mustache, and that’s how Adolf and Eva came into play as new characters.

P.: I am a tragic figure. The total deconstruction of a male psyche. Eva the daughter, Adolf the father, Eva the mother, Adolf the son. A series of versions of the Oedipus complex. The layers certainly get complicated, but I’m convinced that the abstraction comes closer to the truth. 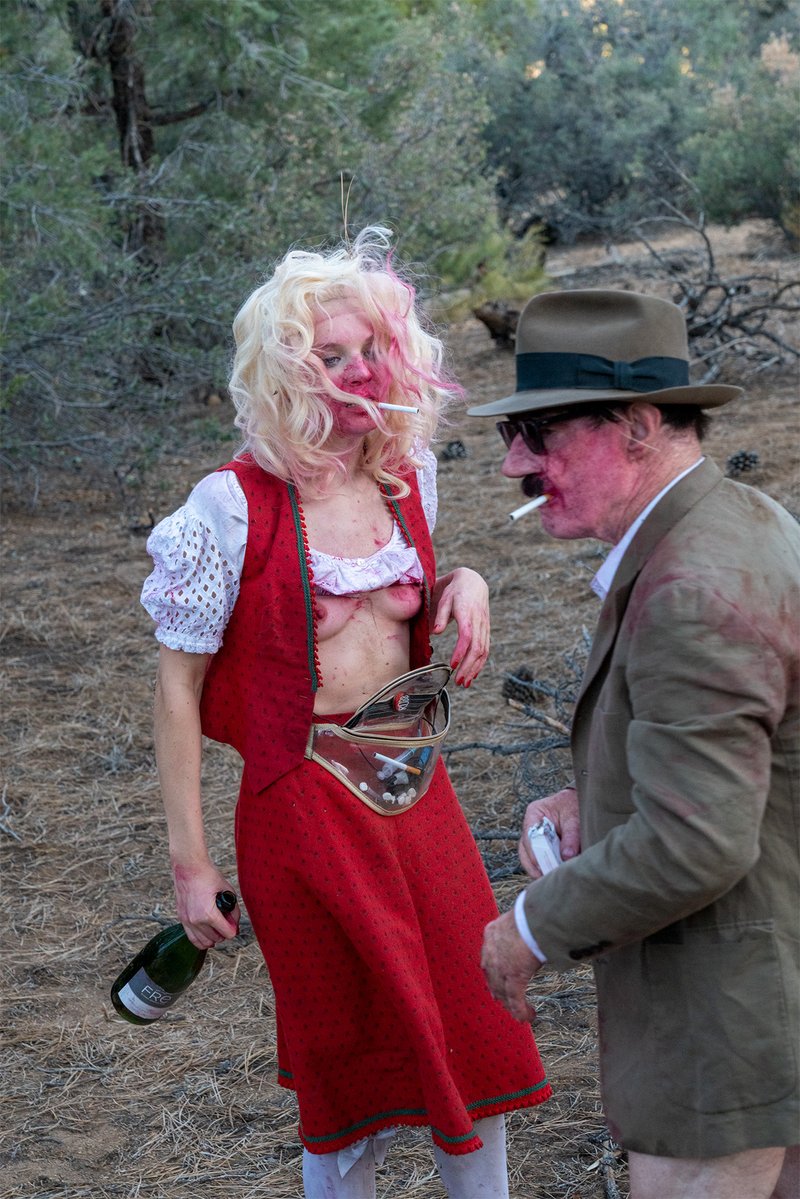 There’s a scene where you, as Adolf Hitler and Eva Braun, interact in nature, in a patch of forest or a cliché Alpine landscape. Did you shoot that in Berchtesgarden?

P.: The first time we shot and performed A&E, Adolf and Eva, was in the summer of 2021 in the lower Sierra Nevada mountains in California. Adolf and Eva are placed in an American western landscape. This relocation, I think, changes the subject of fascism from solely a German issue to a human issue: violence, subjugation, evil. It’s a part of the human psyche and it lives in all cultures.

How do you develop your characters, is there a script or do you improvise?

P.: There is a script, it acts like a skeleton for what can happen. There are chapters and within the chapters there are key phases that we can go to. The improvisation is the real tissue of the action. I think it’s in the improvisation that the real truth often lies. Lilith sends me sections and scenes from time to time. I believe the script and the drawings are works in and of themselves. We use them to set up the situation.

“It takes two to tango!“

How was the cooperation for you?

L: I believe there is a certain intelligence in the act of creation, which knows more then we do. A place where there is no right or wrong; it’s a state, it has to do with dedication to the momentum, it's a form of drunkness, a dedication to the thing itself. That’s what I sometimes experience in working with Paul.

P: What you describe works best when I interact with others and with you, Lilith.

L.: Yeah, it takes two to tango! The more different the people and their points of view are, the more interesting and potent it becomes. The most improbable constellations lead to the most surreal results.

Lilith, you were born and live in a big city, Berlin. So what relationship do you have to small-town life, that hotbed of repression and horrifying power structures?

L: Berlin is very provincial and is becoming increasingly small-minded. On top of that, every square meter is planned out and curated, there’s nothing left to conquer. Every tree has a number. Sometimes it can feel like being buried alive; there is little room for interpretation left in terms of existence—just like in the confines of small-town life. Berlin is like gum that has lost its flavor.

Paul, you grew up in Mormon Salt Lake City. Did that have an influence on your art?

P.: I’ve lived in Los Angeles since 1970. I grew up on the outskirts of Salt Lake City, Utah near the mountains. I think both of these cities have played a part in my work. They both have their own form of ugly. Salt Lake City is in a valley surrounded by mountains. It was and to some degree still is a human controlled space like Disneyland which is surrounded by a manmade hill with a train.

German theater and film actress Lilith Stangenberg (*1988) has been working with US artist Paul McCarthy (*1945) since 2015.