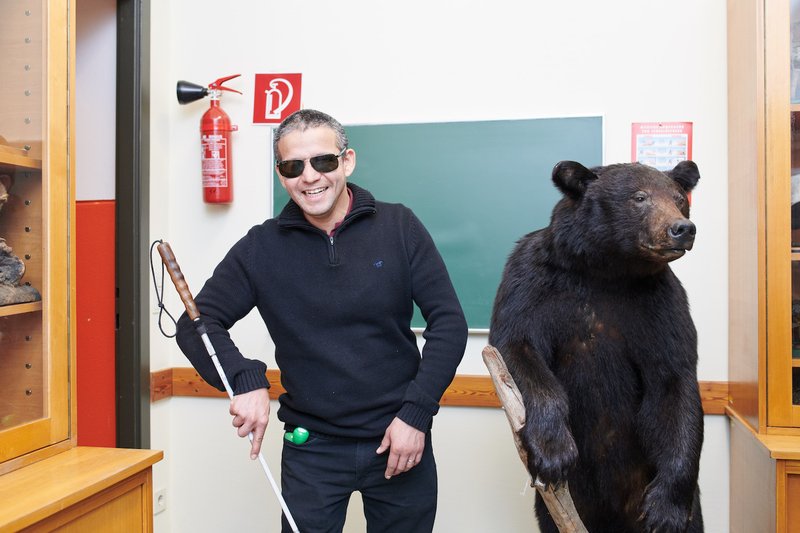 All eyes on me

In the middle of the green Prater we meet Julia, Kerstin, Damla, Dilan and Juan. All of them are blind or severely visually impaired. We talked to them about prejudices, sea cucumbers and the beauty of smooth screens to find out what the term beauty, which has strong visual connotations in our culture, means to people who cannot see or can hardly see at all.

Two little tough guys, a couple of squirts no more than ten years old, come racing around the corner. One with blackout glasses, the other with a white cane. They are blind. The two of them scamper around us, striking a pose as soon as they hear that someone has a camera. Casually arm in arm, the cane sophisticatedly thrust to the side, their chins provocatively raised they shout: “Take a picture of us! Go!”

The Austrian Federal Education Institute on Wittelsbachstrasse in Vienna’s second district is located just a stone’s throw from the Prater, the largest public park in the city. As the second-oldest institution of its kind in the world, the school has dedicated itself to educating and training blind or visually impaired children and adolescents since 1898. Its aim is to enable students to lead their lives as independently as possible.

“Stroking my hand over a thin, smooth screen—that’s beautiful to me.”

Julia, greets us curtly and gets straight to the point: “What electronic devices did you bring? Windows or Apple? iPhone 6 or 7?” Before we know it she has grabbed our smartphones. Julia has been at the Institute for the Blind for six years; at this point she has almost completely lost her vision. She quickly gets bored of the photo session: “Are you going to keep taking my picture for another hundred years, Christian, or can I finally touch your devices?”

What is beautiful to you?

If I like a person’s voice and character, I don’t care whether they are actually good-looking. But if they’re good-looking on top of everything else, that’s fine too! To me, for instance, a haircut like boxers have is beautiful. Short hair on the left and right, longer on top. Kind of like a hedgehog. And broad shoulders. Sometimes I like beards too.

Are you describing the man of your dreams to me right now?

And how do you know if a man is beautiful? You can’t see him, after all.

I’ll just ask him. If I’m not sure whether he’s telling the truth or not, I’ll check with other people (laughs).

What would you consider a nice compliment?

I’m happy about any compliments as long as they are honest. Anything at all. Sometimes people tell me I’m pretty. I like to hear that, of course.

What is a beautiful place in the city?

I think electronics stores are beautiful. I like to go to those big retailers like MediaMarkt, Saturn, maybe even an Apple Store.

What kinds of places do you avoid?

The opera or libraries, since I can do all of that digitally. And museums. Most of the time you can’t touch anything there. And I can get the descriptions of things from the Internet.

What is your favorite material?

Glass or metal. And I like to touch any kind of electronic device. I like the way the keys feel. Stroking my hand over a thin, smooth screen, feeling a modern case—that’s beautiful to me.

Who or what do you consider especially beautiful?

My iPhone. And a friend of mine is very beautiful. At least that’s what other people have told me.

“I recognize the beauty of a person by their voice.”

Kerstin lights up as she greets us in her office. A former student, she is now a librarian at the institute’s Braille library. Before returning to the school, she spent five years working as the Austrian Police’s only blind telephone operator. “I wanted to gain experience there, but it wasn’t an easy time for me. I had to fight and learn to assert myself. That made me strong.”

“I recognize a person’s beauty by their voice. A person is beautiful to me when they have a pleasant voice. I think I come off as brave or strong. I’ve become very self-confident and open, I definitely used to be shier. Someone recently said to me: ‘You’re glowing from the inside out!’ That’s a really beautiful compliment to me.”

Damla is a student at the Institute for the Blind. When we ask her how she can tell if someone is wearing makeup she looks bewildered. What kind of question is that? Damla is blind in her right eye, though she can still see quite a bit with her left.

“What do others find beautiful? I think most people like beautiful hair. Especially women like it—and makeup and nice clothes are important. What do I particularly like to touch? Cats! I love cats!”

“What is especially beautiful to me? The sun.”

Dilan is the youngest of our interviewees. When mention that, she replies emphatically: “You’re always young on the inside!”

“What is especially beautiful to me? The sun. Feeling the warm rays on my face immediately puts me in a good mood. Sunshine automatically makes my day better. I don’t like clubs. I generally avoid places that are cramped or public places with too many people. Sometimes they push right up and really stick to you—I hate that!”

Juan, 37, who has been blind since birth, began teaching at the Vienna Institute for the Blind in 2015. His office on the top floor is bright, spacious, and sparsely furnished. “Do you know what the people who assigned me this office said? That this office has the most beautiful view of the city. Too bad they wasted that view on someone like me!” Born in California, he has taught click sonar, orientation, and mobility in 27 different countries. It wasn’t the beauty of Vienna that captivated the globetrotter, but love—he has been married to a colleague for three years now.

What disgusts you, what do you consider ugly?

I had a terrible experience in Thailand once. I touched an elephant and immediately felt sorry for this gigantic animal. Hairy, rough, spongy—skin like that stretched over a huge body, it must be a horrible-looking creature. But actually elephants probably look okay!

I think they look pretty okay! What is beauty?

There is so much beauty in the world! I think there is a lot of beauty in things that people create and design. Especially when many creative minds—engineers, designers, artists—come together to build something and create perfection. In general, I believe that perfection, or even better precision, is an indicator of beauty.

When it comes to people, there are certain social standards—muscular bodies, more or less symmetrical facial features. So here, too, it comes down to precision and perfection.

How do you “see” if someone is beautiful? Do you ask other people?

In the past I might have asked someone else whether a person is beautiful. When I was a teenager, for example, “Hey buddy, how does this chick look?” But I haven’t done that for a long time now (laughs)!

“A lot of things that feel beautiful actually look like shit.”

Since you can’t see yourself in the mirror, how do you know what you look like?

If there is one thing I’ve learned in life, it’s that no matter what is going on, all eyes are on me. Always! The first thing that happens when I step off the train and into a crowd: Everyone looks at me because of my magic wand. That’s why I try to at least dress presentably. And I am usually dressed presentably, since my wife fortunately has something of a say in the matter. It’s important to me that clothes always feel perfect. A lot of things that feel beautiful actually look like shit, unfortunately. My wife often points that out to me.

You teach blind people to orient themselves by using clicking and snapping sounds. How does that work?

Many blind people have little sense of space, of the properties of objects or public areas. They can’t imagine what a train station or an intersection looks like, for instance. Blind people have to go out there and actively grasp—literally—their environment and surroundings in order to understand them. Click sonar can expand their range of motion. It allows you to tell from a distance of four meters how far a door is from the corner of a room—without having to fumble along the wall, simply using the echo of the clicks and snaps you produce. The range goes well beyond the one meter a cane gives you!

Off the top of your head, who or what is especially beautiful to you?

My wife said the answer has to be her!